The Indian roti, as well as the whole wheat flour tortilla, have gained enormous popularity across the world because of their marvellous flavour and delicious taste. The unique procedures of making roti and tortilla especially by the professional cuisines and restaurants such as Rotimatic have over the period earned name and fame despite their traditional characteristics. The roti, as well as tortilla, are flat-breads made out of whole wheat flour, water, salt and oil. However, they are also made with added ingredients as per region-specific preferences using other flours such as millet and other corns and mixing with vegetables etc. One of the unique characteristics of roti and tortilla is they can be made at easy and faster ways with simple methodologies. 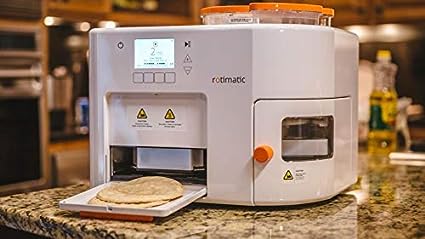 The Difference Between Roti and Tortillas:

Roti and tortilla contain different level of fats to bring respective smoothness and flavours. The tortilla is made by using lard or vegetable shortening in order to bring about their smooth and silky texture whereas the roti uses a bit of rougher dough and vegetable oil or canola oil. Often, the roti does not use any oil content but still brings the flavour and taste. However, the roti and tortillas are similar to each other than their negligible differences.

The whole wheat tortilla is very popularly served across the Mexican cuisines and ranges between the sizes of six to ten inches in diameter wrapped with burritos and tacos. The tortillas are made out of basically four types of ingredients such as whole wheat flour, warm water, lard or vegetable shortening. The process of making tortilla involves processes such as combining the salt and whole wheat flour and adding lard or vegetable shortening until they perfectly mixed or until all the ingredients get incorporated. Then water is slowly poured into the mixture while preparing the dough and kneading the dough for around five minutes until the dough becomes smooth. Once the dough is prepared, the dough is divided into small balls which are then covered for around half an hour before rolling them and cook.

The Process of Making Roti:

The roti involves traditional methods of techniques in Indian cuisines but with added versatilities and innovations. As in the case of tortilla, roti is also made with easy, simple and faster methods. Roti is made out of ingredients such as whole wheat flour, water, salt and oil. In order to start with the process of making roti, a required quantity of whole wheat flour is taken in a bowl and salt is added into it. Then the drizzling process is done with oil and warm water and then stirring continues until the dough is prepared. When the dough holds together knead still continues for another three or five minutes in order to make it smoother. Once the dough is ready to use, small balls are made out the dough and then rolled into round shapes before cooking.

Both tortillas and roti follow a similar cooking procedure after rolling them into five to seven inches of round circle shapes. The roti and tortillas are normally turned again and again in order to bring a perfectly round shape which is often preferred by the consumers based on their numerous Rotimatic reviews. Then the rounded roti and tortillas are placed on a non-stick skillet or cast-iron one by one each for around half a minute until they turn spotty brown.